Learn More from SAMHSA’s “Facilitating Cross-System Collaboration: A Primer on Child Welfare, Alcohol and Other Drug Services, and Courts”

Courts oversee the cases through a series of court reports and hearings. The court cases begin with the filing of an abuse petition, neglect petition, or both.1 States vary in who has responsibility for filing the petition, but generally the petition is written by the child welfare agency and an attorney representing the agency files the petition with the court. This petition describes the allegations of abuse or neglect incidents that necessitate removing the child(ren) from the home or court oversight in cases in which the child remains at home. States vary in their approach to court oversight of cases in which the child is not placed in protective custody. In many locales, however, the court may find that the level of risk to the child does not necessitate placement in protective custody but that there is justification for the court to retain oversight of the child’s custody while the family receives supportive services. In many locales this is referred to as court-supervised “in-home” services. In both circumstances of in-home or out-of-home services, after the petition is filed,the court case proceeds through a series of hearings and formal court processes. Again, the nomenclature for these hearings varies by jurisdiction; the most common sequence of events in different States is described below. 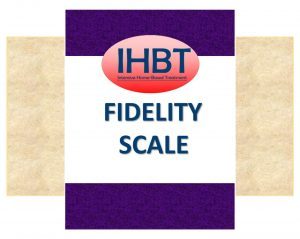 Consistent with the Ohio Department of Medicaid’s (ODM) and OhioMHAS rules to promote high-quality service, the IHBT Fidelity Tool was developed to ensure compliance with IHBT service delivery standards.

The Fidelity Tools (Individual and Team Model Tools) consists of 12 fidelity standards, with ratings measured on a 1-5 scale. Each rating of 5 indicates best practice for that standard. Minimum fidelity is achieved between ratings 3, 4 and 5 which are highlighted within each standard.

The Teamed Model page contains Fidelity Review instructions and data table requirements for teams certified in the Teamed Model. The Teamed Model is made up of one or more two person teams sharing clients and consisting of a licensed clinician and either QMHS or Peer Support staff.”